Having visited Project Coffee, the time has come to give Café Grande its chance. Fair to say, it’s better than Artisan Roast – but miles away from Project, despite these two virtually neighbouring.

The minute I entered Café Grande I stopped. For a second I thought I went through the wrong door and ended up in some Auld Scottish Pub; the décor definitely brought that idea to mind (most likely it hasn’t changed much since it was opened under the name La Cafetiere in 1984). Then I noticed a cake cabinet, two steps from the door, and figured that this must have been the place. I was quickly greeted by a waitress who invited me to sit down and was then offered a brew and cake menu. This was the first place, I noted instantly, that asked me if I wanted whipped cream on my mocha – to think that I used to be convinced that was a universal standard! 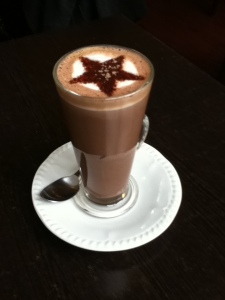 With no whipped cream, the coffee was still nicely decorated, which suggests that some thought (and effort) went into the drink. A bit disappointingly – and not only with the bar raised mile high after my last experience – the coffee was too sweet and resembled the instant Cadburry’s type (I noted some unmixed powder still stuck to the side of the glass). I don’t intend to denounce mochas based on instant chocolates as a coffee shop’s mortal sin; I actually used to love these sweet mixtures back in the day, and would probably still appreciate it today in some kind of a pub, if I happened not to be drinking cider at the time (you never know). Yet, if you call yourself Big (it. Grande) you should also aim to impress in same dimensions.

This was a lunchtime observation; however, the Cafe Grande website promises a “transformation” into a candle-lit bistro after sunset. Overall, the experience was pleasant and the coffee was not as bad as I am making it out to be. It has a good reputation among the locals, so if it’s not for the coffee, I’m guessing their food is of the higher standard.

Still, out of the Bruntsfield Place selection… you know my pick.