It was a hard decision to make that one afternoon, when I only had half an hour to spare and was craving a good cup of coffee in Bruntsfield Place. ‘How?’ you might ask, considering the abundance of cafes on that small corner, many of which I have already reviewed. Well, I had decided to chose between two venues that day: a tiny French patisserie that someone had recommended to me or the refurbished Artisan Roast that I had seen from the bus on my way to Merchiston Campus, and which, quite frankly, stunned me with the new, very promising decor. In the end, I opted for the French place, simply because it was closer to where I was.

Another French place, yes, but this one did not astonish me as much as Patisserie Valerie; it was a very different place overall: no glamour, no luxury, and definitely no space. It seemed to me like too many tables were cramped inside, robbing a casual visitor of any personal space. I ordered my soy mocha and sat at the most isolated seat possible: by the wall, the pastry case and another empty table, and as I waited for the coffee to be delivered I observed the people around (reading a newspaper, working on a laptop, staring out into the distance of the opposite wall…) as discretely as I could. I have to say, I was rather impressed with the tea that the woman across from me was served – together with a small hourglass on a saucer, timing the brew. Cute. 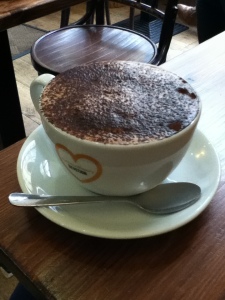 But any expectations this curiosity might have brought up in me (together with the size of my coffee) were quickly diminished after the first sip of my drink. Despite the appearances, the layer of foam was quite thin, and the first thing I felt was a very hot beverage and the sweet chocolate dusting; but then followed a bland taste resembling soy milk mixed with hot water and some coca powder. I struggled drinking up, for the taste and for the temperature, and mostly for the size of it.

However, the staff seemed nice (and definitely French) and their cakes looked as good as those of their chain competitor – and were at a much better price. I’d like to think that this was a misfortune and that usually their coffee tastes much better, as it is a lovely spot for a petit dejeuner in town or a quick take-away coffee + macaroon; but I probably won’t be coming back to check whether that’s a fact.

Verdict justification: Too intimate – not my kind of place. That, and the fact that the coffee simply wasn’t a mocha.

One thought on “La Barantine”