Not often do I make impromptu weekend trips to London, but whenever I do, I always experience something new and intriguing in this grand city – whether planned or not. What took my fancy last time was a visit to the London Eye – and somehow I managed to secure tickets on the day – a Saturday! – just hours before my planned “ride with a view”.

Booking online allowed me to skip the horrendous queues on the South Bank and even get on the Eye half an hour before the time on my ticket – both of which facts I only learnt upon arrival. Hence – not knowing how long would it take me to walk from Kings Cross to the Jubilee Gardens – I set off early and arrived at my destination with about 90 minutes to spare. And – to my delight – there was a coffee van on standby to help the time pass.

The Look mum no hands! campervan

It took me a tiny-wee while to realise what I was seeing when I approached the wheel-less campervan, as I was walking along the Themes. “Look mum no hands“? I was sure I had heard the name before… and then I clicked: it was on my big list of cafes to visit in London during my three-week stay in late 2012. I didn’t remember it being advertised as an open-air venue though; only some research after I returned home revealed the van was just a pop-up, and there were two actual coffee shops in town: in Hackney and Islington. I was excited nevertheless to be able to squeeze in a coffee review into that trip.

So I stood myself in the queue which took longer than it should have to get sorted by the two baristas inside the van: one was working by the espresso machine, keeping professionally focused and quiet; while his unmistakably Australian colleague was in charge of chatty customer service.

Coffee is best enjoyed in company and – even though a visit to a cafe hadn’t been actually on the cards – I was at the time joined by a friend with a particular taste in macchiatos. However, the Aussie was baffled when I ordered one so I had to reword my request to: espresso with hot milk on top. I did not see a mocha on their menu, but having high expectations of the mysteriously named chain I decided a flat white would be just as good to make my judgement.

Then I stood by the van,looking like I was waiting for a burger, as a group of three men ordered their builders’ teas. My flat white was served first – in a take-away cup, of course – after which the espresso-barista asked: “Espresso with hot milk? Like a macchiato, yeah?”. I sighed with relief that at least the guy who was making the coffees was on the ball – especially when I watched the Aussie prep the teas with rather shaky, inexperienced hands. 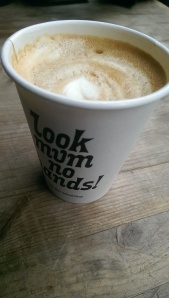 Coffees in hand, I joined my companion at one of the creatively designed tables, which had beer crates converted into stools – strategically positioned under the Hungerford Bridge to protect us from the rain that threatened to ruin the stroll. The train tracks just above our heads, and frames of bicycles with no wheels centrally in the view, added to this outre experience; and to top it off, we soon learnt it was the Queen’s birthday, as a massive Voyager flew over, followed by some Red Arrows, trooping the colours on the sky.

Unfortunately, the coffee itself did not fit this queer picture: it was sharp and bitter and left an unpleasant, lingering aftertaste in the mouth. To be honest, at first it seemed alright – but I made it worse by trying the macchiato, which was bound to be stronger than my flat white – and only intensified these sensations when I returned to sipping my brew. I was glad I had also equipped myself in a bottle of water and chewing gum to ease off the heaviness in the mouth, which quickly began to hit my rather tired weekend head. You can’t deny this baby strength!

It is a real shame that such an engaging place would be let down by its core product – the coffee. But maybe I’m wrong saying that, as the van also offered a tempting selection of jam-packed sandwiches and cheese platters. I guess the working conditions pose a number of additional challenges to the already difficult task of making a worthwhile cuppa – but a reputation is something every outlet of its famous parent cafe should live up to, and personally I felt rather let down by this one.

But taking all into account – it was still quite fun!

Verdict justification: Really cool place for a pop-up coffee shop – but the hot drink offering does not live up to the expectations!

I hadn’t really heard much about Aberdeen’s West End until a job took me round that area of the city. It was a Sunday commission, but made better for a lovely, sunny day and the charm of the quiet, peaceful district. I was mesmerised.

But when work was done I could not have thought of anything better than to top that pleasant weekend afternoon with a cup of coffee.

I didn’t have much hopes for that, because in that peaceful neighbourhood shops were scarce – and it was a traditionally “cafe closed” day anyway. And yet, a quick Google search brought a pleasant surprise – there was a coffee shop open, just nearby.

I quickly directed my steps towards St Swithin Street and the familiar-sounding Rocksalt & Snalils. In fact, the place I visited in Edinburgh was called simply Rocksalt, and sold very nice sandwiches, but not great coffee.

The Aberdeen cafe – which also has another shop in Ballater – also turned out to be a deli, with a wee menu on the side wall offering a selection of paninis; and a coffee menu just next to it – which I only noticed after I made my take-away order (the place was packed full, and it was too nice a day to stay in anyway).

The place was buzzing; but all of the four or five assistants behind the spacious bar were busy preparing food and no one seemed to bother with the coffee machine behind them, until a heavy-tattooed guy appeared (which rather added to the charm of this eco-feel place) who was evidently in charge of making brews as he just cracked on with it.

I wasn’t directed as to where I should wait so I moved from in front of the bar to its side, and leaned over one of the high wooden tables; from this point I could observe how my mocha was made – like the fact that they used cocoa powder from a sprinkler to line the bottom of my cup with chocolate, which I found rather unorthodox and was therefore even more curious of the result.

Eventually, my soy mocha was ready and served straight into my hands. I set off to find a quiet bench somewhere outside before I took my first sip – and I wasn’t impressed when I took the lid off, seeing that the frothy foam had begun collapsing. It didn’t get any better with drinking – the coffee lacked sweetness, other than the flavour of the soy and some caffeine hints throughout, and the dusting of chocolate on top. It tasted very bland and I struggled finishing it – having seen it made I knew the sweetness would not increase as I went on, as there was nothing on the bottom of the cup that still needed dissolving.

So, unfortunately, that cup of coffee that was meant to round up a lovely day actually turned out to be quite a disappointment. Although it was a busy place, no one seemed ran down, and yet nobody seemed particularly attentive, despite quite a number of staff on shift. It might have been the Sunday syndrome, but either way Rocksalt & Snails did not impress me – and it’s a part of the West End I’m not particularly keen on revisiting.

Verdict justification: Bland coffee and mediocre service. Could be a nice venue on a quieter weekday though.