The same trip to London that I mentioned in my previous review, Cafe de Pierre, had actually begun with an early morning journey from Aberdeen and a very premature arrival to the Park Lane Hotel, with a few hours to kill before moving into my room and a rumbling stomach to feed. Not that familiar with the Green Park area of the city, I was only aware I was right next to Shepherd Market, which I remembered from my previous flash visits as the place to go to in search of a tasty lunch or dinner – but did they serve breakfasts also?

Quick Google search suggested that Cafe Mish would be just the right spot for my needs, and it ranked quite highly among reviewers. I found it in no time, and was glad to see that – despite it’s very restricted dimensions – there was seating available. Upon arrival I was advised at the time only breakfast sandwiches were being served – an ample selection of different variations of Eggs Benedict and the likes, at unbelievable prices considering we were still in the centre of London.

I went for what turned out to probably be the worst choice out of the available – an open sandwich with poached eggs and avocado – as the eggs were lukewarm; but the Flat White that I had with it was magical.

Two days later I decided to return for a second shot at a different breakfast option; this being a Saturday, there was no customers when I got there back of 11am, and only one appeared before I left – so no problem about the seating. This time, however, they were missing brioche buns that I was really keen on, but still went for the Mish E.S.B (egg – sausage – bacon), which was alternatively served on white toasted bread – and was divine!

But the proof is in the pudding, as they say, and I was eager to dive into my Flat White (neither of the two times did it cross my mind to order a mocha, for some reason) – and just like the first one, it was smooth and creamy, and very moreish – but just of the right size, so it left you feeling completely satisfied.

On top of this, the staff were extremely friendly, relaxed and chatty – talking to you for only as long as you were keen, meaning they were no nuisance interrupting your food. In summary, a great hang out place for (mostly) top-notch quick breakfast and a wonderful cup of coffee, at a fabulous price – and I really hope it does well for itself.

Verdict justification: Just what the doctor ordered for a moreish breakfast bun and great coffee; only the seating might be an issue, and the wait for your bun during busy times!

London is a true haven for coffee lovers – I think even if I had lived here, I would have struggled to visit all the coffee shops it has on offer, and discover the gems among them. Instead, as a tourist – ironically – you tend to end up going for the most convenient high street options when in need of a quick fix.

Thankfully, in London “high street cafe” does not only mean a Caffe Nero or a Starbucks, as there are plenty of other chains in the capital – one of them being Caffe Concerto.

De Pierre, despite the different name, is part of the franchise – if you had visited Concerto before, this becomes obvious once you cross its doors (particularly if, like myself, you visited both within two consecutive days): the massive chandeliers, burlesque-like decor and smart-uniformed staff cannot be mistaken for anywhere else.

And neither can the menu. They were pretty much identical in the two places, with only a slight difference in price for the breakfast specials; the coffees were priced the same, and worryingly (for some reason I did not see that as promising) expensive. 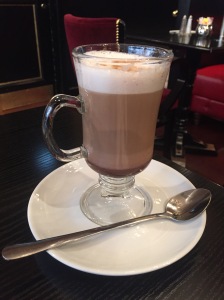 The staff – albeit only two of them taking and delivering orders in a pretty crowded cafe – were bravely smiling and assisting customers with their requests, and apologising for even a small wait. As I sat down, I was quickly attended to, and ordered my scrambled eggs with smoked salmon and a mocha.

The coffee arrived first, so I could start to appreciate it fully on an empty stomach before the ample and delicious breakfast arrived, minutes later. The appearance of it was rather pleasing, considering the layers of chocolate, coffee and milk, albeit the top layer looked a bit too frothy, which got me a bit worried. However, I gave the whole thing a stir and took a sip… and it was truly lovely. The smooth concoction was sweet and punchy, and of the perfect drinking temperature.

I went through my breakfast before finishing the last drops of it, feeling very fulfilled and ready to face a day of exploring in London.

A trip to Caffe Concerto the following day, just two minutes up Piccadilly Street from its sister, was a tad disappointing. The staff seemed tired and disinterested, and it took a while before my order was taken – although I have to admit it looked pretty busy. I then easily managed to drink my coffee before the food arrived as, although the drink was still sweet and pleasant on first sip, it was also – for once – just below the right temperature and cooled down further quickly.

Out of the two, Caffe de Pierre is certainly worth recommending, leaving pleasant memories and aftertastes, albeit on a tad expensive side – but, all in all, not bad for a high street chain after all.