This was one hearty cup (glass?) of coffee. Stronger than expected at a chocolatier’s – but the chocolate side of it did not disappoint! 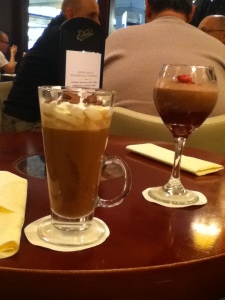 Made with original Wedel milk chocolate and crowned with chocolate shavings, this was a mocha from the heart of Polish chocolate tradition. I felt it a bit sacrilegious choosing a coffee out of the tempting array of  hot chocolates – the brand promised to deliver on their signature produce.

The E. Wedel company was established in 1851 as has quickly made a name for itself across the continent, with chocolate shops in Paris and London, among others. Since 1999 it was actually part of Cadbury plc. until sold to a Japanese company, Lotte, in 2010.

Definitely worth visiting for the long confectionery tradition and historical influences over the 19th and 20th centuries; or you might at least pop into a Polish deli and get a box of Ptasie Mleczko (chocolate covered marshmallow) to get a taste of one of the classics.

As for the coffee, couldn’t take my lips of the rim and finished it in three (decent) sips. A glass of water would have been appreciated, as it proved a bit too strong for 8pm – my bad! 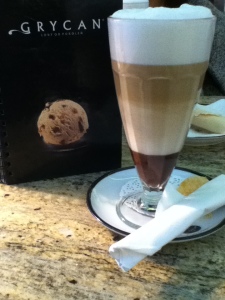 The only minus (sorry to say) – not sweet enough!

Another Polish company raised on family tradition – of making ice-cream. Although formally in business in its present shape only since 2004, the name has well established itself as an upper-shelf brand on the Polish market.

Whether it’s because it famed itself in (allegedly) delicious ice-cream, the coffee’s not raised to the expectations set out by the presentation. I have a thing for those little biscuits served on the side of the coffee (you will read me write this many a time), I generally think it’s a lovely touch that shows the company still cares about prevailing the spirit of  a local coffee-house, even when cutting down on costs (which many coffee giants tend to do these days).

If I happened to stumble across one of these shops again, I would definitely try an affogato or a different coffee with ice-cream. Maybe mocha is not their strongest side – or I was just having a very sweet tooth that day. My companion thought it was too sweet (then again, she does like black coffee…).