The same trip to London that I mentioned in my previous review, Cafe de Pierre, had actually begun with an early morning journey from Aberdeen and a very premature arrival to the Park Lane Hotel, with a few hours to kill before moving into my room and a rumbling stomach to feed. Not that familiar with the Green Park area of the city, I was only aware I was right next to Shepherd Market, which I remembered from my previous flash visits as the place to go to in search of a tasty lunch or dinner – but did they serve breakfasts also? 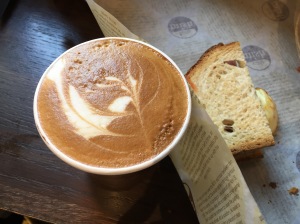 Quick Google search suggested that Cafe Mish would be just the right spot for my needs, and it ranked quite highly among reviewers. I found it in no time, and was glad to see that – despite it’s very restricted dimensions – there was seating available. Upon arrival I was advised at the time only breakfast sandwiches were being served – an ample selection of different variations of Eggs Benedict and the likes, at unbelievable prices considering we were still in the centre of London.

I went for what turned out to probably be the worst choice out of the available – an open sandwich with poached eggs and avocado – as the eggs were lukewarm; but the Flat White that I had with it was magical.

Two days later I decided to return for a second shot at a different breakfast option; this being a Saturday, there was no customers when I got there back of 11am, and only one appeared before I left – so no problem about the seating. This time, however, they were missing brioche buns that I was really keen on, but still went for the Mish E.S.B (egg – sausage – bacon), which was alternatively served on white toasted bread – and was divine!

But the proof is in the pudding, as they say, and I was eager to dive into my Flat White (neither of the two times did it cross my mind to order a mocha, for some reason) – and just like the first one, it was smooth and creamy, and very moreish – but just of the right size, so it left you feeling completely satisfied.

On top of this, the staff were extremely friendly, relaxed and chatty – talking to you for only as long as you were keen, meaning they were no nuisance interrupting your food. In summary, a great hang out place for (mostly) top-notch quick breakfast and a wonderful cup of coffee, at a fabulous price – and I really hope it does well for itself.

Verdict justification: Just what the doctor ordered for a moreish breakfast bun and great coffee; only the seating might be an issue, and the wait for your bun during busy times!

Appearances can be so misleading…

That’s common knowledge, I know, but I still get surprised – positively or negatively – by some venues that seem to be one thing, but prove to be another.

This cafe in London’s St Katherine Docks is but one example. That sunny morning I had been wandering around the Tower Bridge area and stumbled upon this hidden spot, filled with water, boats and cafes – which reminded me I hadn’t had breakfast! Although the choice was ample, none of it seemed to appeal to my tastebuds at the time: I didn’t want to end up in a Starbucks, nor did a Turkish restaurant sound like a good idea at that time of day.

Eventually, I decided to settle for an unassuming venue, bearing the name of this charming part of the city, and promising “Healthy Food” on its signage.

I went inside to order, to be greeted by a deli counter and a rather grumpy owner, and his helper, quietly busying around the coffee machine; instantly I regretted my decision, but it was too late to turn back, and my stomach was growling at this point, so I ordered my scrambled eggs with salmon and – after sparing a second thought on the barista’s coffee-making capabilities – a mocha.

The outside area, albeit chilly, presented itself as a nicer place to sit, so I took one of the tables (tightly placed next to one another allowing little privacy) overlooking the docks, and the rather depressing looking Tower Hotel.

The coffee arrived very quickly afterwards, and although the barista didn’t offer to wipe the spill on the saucer, my idea of the venue took an instant turnaround. Just by looking at the cup, with effortless latte art on top, it was clear this would be a special brew. I took a sip… and was not disappointed. The texture was smooth and creamy, the flavour packed a punch in caffeine and sweet chocolate.

Because the food took longer to arrive, I actually ended up ordering a second mocha, and managed to drink most of it before I had to loosen the belt a bit and be off on my way.

I would certainly return to the Docks, and – if it was a non-fuss service and great coffee I wanted – I’d put St Katherine’s cafe on my priority list.

Verdict justification: Lovely coffee and nice views of the boats, but the impersonal service spoils the magic a little bit.