My quest for seeing more of Scotland in 2017 continues, albeit sill in a limited range from Aberdeen… My latest trip took me to Montrose – a coastal town between the City and Dundee, which I had previously visited twice – both times on a murky, cold and wet day.

This time, it was a glorious early afternoon, and the coastal route looked mesmerising – even if the drive was a bit hazardous considering the freezing temperatures and ice on the roads. In fact, the trip was worth even just that stunning panorama of the sea shimmering in blissful sunshine…

And that blinding shine continued in Montrose where the low winter sun made it difficult to figure out which way the curious road system was going; however, finding Pavilion Cafe, where I was meeting my dear friend currently living in Forfar, proved pretty straightforward.

Once I reached Melville Gardens, the Pavilion was impossible to miss – it looks like a pavilion after all. As I entered, the place was mobbed (no surprise considering it was Saturday lunchtime), but my friend managed to negotiate two seats at a 4-person table, next to another pair of “girlfriends”, also seemingly catching up on recent affairs. 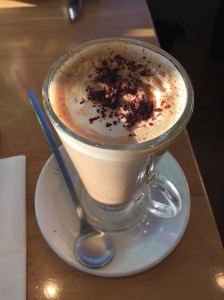 The waitress arrived straight away to present to us an extensive menu of the day’s soup, quiche, special mains and desserts… out of all that the deli platter caught our ear and – seeing that we had both had a wee breakfast earlier – we decided to share it.

We also went for the coffees at this stage, which arrived quickly after we placed our order; it’s a good job I was immersed in a conversation as my disappointment probably didn’t show as much – a mocha served in a tall glass doesn’t fill me with confidence. Also, the colour of it was quite pale, so I wasn’t expecting a punchy brew; and, sadly, I was right – the coffee was a bit on the weak side, not offering much cocoa sweetness and resembling more a sweetened latte rather than a mocha.

Which was a great shame, because the venue was very warm and welcoming, with huge dose of character and bursting with life; the staff were friendly and easy going but also attentive; and the food was lovely, offering something for everyone’s taste, and more.

Even though I wouldn’t rate the coffee the highest, I would certainly recommend paying the Pavilion a visit – I know I will, even if it’s just for one of the extensive selection of scrumptious looking homemade cakes…

Verdict justification: So-so coffee but a lovely venue for a quick snack or a longer catchup with friends